A message from David Bastviken:

For your information The Inland Water Greenhouse Gas FLUX Forum (IWFLUX) was just made public and open at www.tema.liu.se/tema-m/iwflux

IWFLUX is a web based resource for and by the active community where we can jointly gather and share information we find useful to learn more about inland water greenhouse gas fluxes or related topics. At present, this is just a structure to be filled with content by us all – this grass root initiative was developed at a workshop on inland water greenhouse gas fluxes in Finland in September last year.

(1) a number of webpages for established/referenced information expected to be reasonably stable over time,

(2) an open discussion forum for any IWFLUX related discussions/questions including aspects not yet established, and

The format of all parts is deliberately kept simple to minimize maintenance work given that this is a non-funded initiative at present. I also quickly realized there is no perfect structure for all webpages so we now have a start that may develop based on upcoming needs.

IWFLUX is also a global effort on all GHGs where we can gather links to related networks that are regional or concern specific GHGs.

The original idea is not primarily to fill the site with papers or data…but to gather information on where to find key papers or data, and to provide extended information to help us coordinate methods and efforts for maximized future learning and impact. Very fundamental information is also welcome as IWFLUX could be an important resource for students and starters in the field. …but regardless of the original ideas, IWFLUX will develop over time and become whatever we want it to be depending on the contributions.

Contributions can be various types of files and internet links that will be posted in file archives. To make contributions please send them to the IWFLUX coordinator.

So please take a look, spread the news, and hope you will find it useful…and more so when we have filled the present IWFLUX structure with real content!

Many thanks to all who have so far contributed to develop IWFLUX!

Wetland environments, including northern peatlands, are a globally significant source of methane, releasing in the order of 100 Tg CH₄ yr-1 (Wuebbles and Hayhoe, 2002). Emissions from these systems have typically been attributed to microbial metabolism of organic carbon into methane in anaerobic conditions.

However a seminal study by Keppler et al. (2006) showed that methane was produced in aerobic conditions when plant matter was subjected to stress. UV irradiation is a known source of plant stress that was later shown to initiate methane production (McLeod et al., 2008). Further follow up studies indicated that plant pectin was a possible source for the emissions and confirmed that methane could be produced from detached leaf components (McLeod et al., 2008; Vigano et al., 2008). The key outcome of this body of research was the incorporation of aerobic methane production from UV irradiation of plant foliage into the global budget (Bloom et al., 2010). Nevertheless, to date, this pathway of aerobic methane production has only been investigated in the terrestrial environment.

The hypothesis of my research is that plant-derived material transported from the terrestrial environment to aquatic systems may release methane when exposed to UV irradiation. The NERC-funded PhD that I am currently undertaking aims to further investigate the aerobic production pathway as a potential source of methane in aquatic systems.

In order to test this hypothesis, water samples rich in dissolved organic carbon (DOC) were collected from a stream draining Auchencorth Moss (Fig. 1), an ombotrophic peatland area in south east Scotland which is one of the Centre for Ecology & Hydrology’s Carbon Catchments. Upon returning to the laboratory samples were filtered and decanted into quartz vials. They were then exposed to an ambient dose of UV irradiation for 4 hours. After irradiation, vial headspace methane concentrations were measured using gas chromatography.

These initial experiments have demonstrated that aquatic systems contain sufficient levels of plant derived material to stimulate aerobic methane production.  UV irradiation resulted in increased CH₄ production rates of 63.2 ± 16.4 nmol L-1 (mean ± standard deviation for 4 replicates) relative to unirradiated control samples. The increase in gaseous production in the headspace of irradiated vials was coupled with a decrease in DOC concentration in the water sample. This finding is in agreement with the hypothesis that dissolved plant matter acts as the aerobic methane source material and adds weight to the suggestion that UV irradiation plays an as yet overlooked role in the aquatic methane budget.

Increased losses of DOC from catchments in the northern hemisphere have been well documented (Clark et al., 2010) and are projected to accelerate with climate change (Worrall et al., 2004). This creates an interesting setting for aquatic methane research, as it follows that in catchments where more DOC is delivered to aquatic systems, methane emissions stimulated via UV irradiation of organic matter will increase concurrently. Whether this hypothesis holds true in either laboratory tests or field based experiments is yet to be determined, however our initial data present plenty of options to explore. The challenge now is to understand what environmental factors affect aerobic methane emissions and to combine both laboratory and field based experiments to determine the importance of this process in catchment level biogeochemical cycles.

Nitrate/nitrite-dependent anaerobic oxidation of methane (n-damo) is a recently discovered process that is, to some extent, responsible for limiting emissions of methane from water bodies to the atmosphere. Despite its potential importance for carbon cycling, numerous questions remain unanswered about the process. A new paper published in PNAS addresses some of these questions.

The researchers investigated the microorganisms responsible for n-damo, which are bacteria belonging to the candidate phylum NC10 and related to Candidatus Methylomirabilis oxyfera. Through the analysis of sediments from Lake Constance in Germany, it was discovered that the abundance of M. oxyfera-like bacteria was greatest where methane and nitrate profiles intersected, lending support to the hypothesis that these bacteria carry out n-damo. Furthermore, results suggested that denitrifying methanotrophs were more numerous than aerobic methanotrophs at deep, undisturbed locations in the lake.

The authors conjectured that the need for a stable environment could drive the within-lake distribution of n-damo bacteria. For instance, numerous processes could introduce oxygen to sediments in shallow areas of the lake, such as waves, bioturbation, or the actions of algae and macrophytes. Because the bacteria grow relatively slowly, such disturbances would be difficult to recover from. Additionally, due to biological factors, nitrate concentrations are depleted in the upper layers of the lake, but remain higher in the lower layers, thus favouring n-damo in deeper waters.

The authors conclude by stating that n-damo is currently an overlooked process, and that it functioned as the dominant methane sink in Lake Constance. They also include the caveat that care must be taken when studying this pathway, as the close juxtaposition between oxygen and nitrate profiles could result in n-damo being misidentified as aerobic methane oxidation. 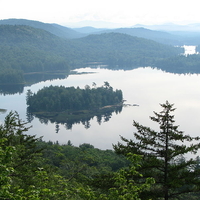 Recent research published in Nature Communications has shed new light on aquatic methane dynamics by demonstrating that methanogenesis occurs at the ecosystem-scale in oxic lake waters.

Despite being a recognised mechanism of methane production, the significance of methanogenesis in oxic waters has yet to be determined.  The researchers, from the Université du Québec à Montréal, used floating mesocosms that were closed at the bottom but open to the atmosphere, thus excluding non-pelagic methane sources.

During the 28-day experiment, dissolved methane concentrations increased in the mesocosms, and water/air fluxes ranged from 0.07 to 0.36 mmol m-2 day-1.  Furthermore, methane production was higher in mesocosms treated with nutrient enrichment, and lower in those treated with dissolved organic carbon (DOC).  The difference in methane concentrations and fluxes between treatments was linked to algal dynamics, specifically both gross primary production and net ecosystem production.  Analysis also suggested that the methane was produced through acetoclastic methanogenesis.  Considering the lake as a whole, mean fluxes from the control (i.e. not-treated) mesocosms accounted for approximately 20% of diffusive fluxes measured during summer, and were of a similar value to ebullitive fluxes.

The authors stress that this is not a missing measurement from aquatic carbon budgets, as this component is captured during standard flux measurements.  However, they point out that “incorporating the origin of the methane that outfluxes to the atmosphere from these lakes is critical to our understanding of the regulation of these fluxes and our capacity to predict their future change. In this regard, there are potentially large global implications for algal-driven oxic-water methanogenesis.”  Additionally, because methane dynamics differed in response to nutrient and DOC treatments, it is likely that aquatic methane emissions will be affected by environmental changes.