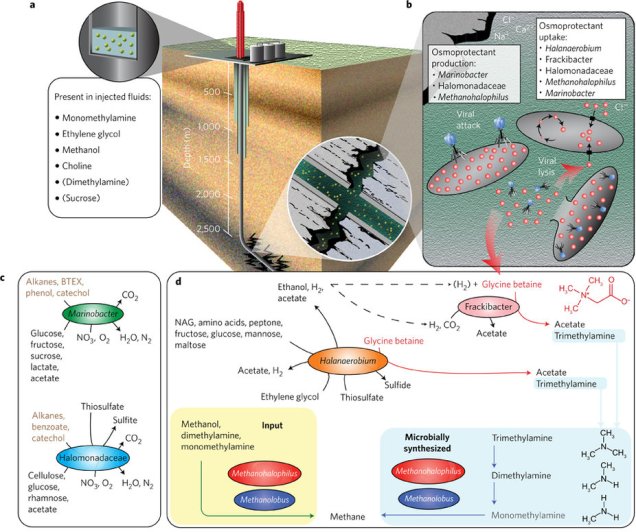 A new study published in Nature Microbiology has shed light on the microbial communities inhabiting hydraulically fractured shale, at a depth of approximately 2.5 km.  The process of hydraulic fracturing relies on the high-pressure injection of water and various chemicals deep underground.

The investigation took place in two Appalachian basin shales in the USA, and involved metagenomic and metabolite analyses on input fluids to the well, as well as analyses on produced fluids over a period of 328 days.  This approach enabled changes in microbial communities and metabolites to be observed over time.

The analyses of the Marcellus shale showed that changes in microbial community corresponded to increases in salinity, and persisting halotolerant and thermotolerant members were found in various bacterial and archaeal taxa.  Additionally, the authors discovered one apparently unique bacteria and proposed the genus name Candidatus Frackibacter.  Over time, there was an increase in the concentration of glycine betaine (GB), which is used by microbes to survive osmotic stress, as well as evidence of uptake and de novo synthesis of GB by microbes.  GB could be degraded by obligate fermenters from the genera Halanaerobium or Candidatus Frackibacter which would produce trimethylamine (TMA).  In turn, it was hypothesised that TMA would be used as a methanogenic substrate by organisms in the genera Methanolous and Methanohalophilus.

The second shale (Utica) investigated was geologically and geographically distinct from the Marcellus shale.  The authors experimentally amended produced fluids from the Utica shale with GB, which resulted in enrichment of Methanohalophilus and Halanaerobium.  TMA production was detected, and the amended samples produced 6.5 times more methane per day when compared to controls that were not amended with GB.  The genomes of Methanohalophilus and Halanaerobium from the Marcellus and Utica shales were closely related, demonstrating that even though the two ecosystems were different, similarities arose in the microbial communities.

Kelly Wrighton, last author on the paper, said: “We think that the microbes in each well may form a self-sustaining ecosystem where they provide their own food sources.  Drilling the well and pumping in fracturing fluid creates the ecosystem, but the microbes adapt to their new environment in a way to sustain the system over long periods.”

Much of the previous research on hydraulic fracturing has focussed on economics and environmental impacts.  However, this new research shows that hydraulic fracturing also creates the necessary physical and chemical conditions for microbial life to persist, and that much of this is implicated in methane cycling.

Image is from the above paper, under a Creative Commons Attribution 4.0 International License.